The Rolls Royce of Refrigerators

The Subzero Refrigerator was the offspring of Westye F. Bakke who founded the Sub-Zero Freezer Company in 1945.

Bakke is credited with inventing the first free-standing freezer in 1943. The Sub-Zero Company is the only company we know of that employs a dual-refrigeration technology which helps to keep refrigerated foods fresher for longer while extending the life of frozen foods as well.

The Subzero Refrigerator is commonly thought of as a built in unit. Contractors and Residents of upper scale homes tend to prefer the "commercial" look of the Sub-Zero Refrigerator and up until recently, SubZero only offered a handful of models in their product line.

The standard SubZero Refrigerator hasn't really changed it's look in decades -- and the cool, sophisticated Sub-Z still attracts. Even when not used as a built-in unit, it is the number one choice among the Hollywood and Corporate elite to place in their own homes.

One of the reasons that Subzero refrigerators are the top choice amongst the weathiest of individuals is because the Subzero Company has truly mastered the art of Integrated Refrigeration which means "anywhere" refrigeration. While other companies merely use face panels to try to match the cabinetry, these integrated Subzero units blend perfectly into existing decor with almost no visible hinges, holes, or vents. It is also designed with a 24" depth. This way it can be installed to be flush with the kitchen cabinets which have a standard 24" depth. To make up for the loss in capacity depth-wise, these refrigerators are often wider than their counterparts to help create an acceptable storage volume.


The Subzero Philosophy: Respect The Food

Subzero is one of the only refrigerator manufacturers who seem to have a true passion for fresh food. Many of the world's top chefs demand Subzero Refrigerators in their own homes.

Subzero has been heavily involved in the push toward the use of locally grown foods. They share the belief that locally grown food arrives to your plate fresher and of course, helps to support and stimulate your local economy. Because there are minimal shipping requirements for locally grown foods, there is less of a negative effect on the environment. Subzero has a fantastic resource for finding Locally Grown Food in your own community.

Many of the Subzero Refrigerators could be considered true masterpieces of preservation and they can be tailored to fit your particular refrigeration needs. Depending on if your family is four or fourteen, a refrigerator from SubZero might be exactly what you need. From their 650 Over/Under Refrigerator Freezer to their Pro 48 line of refrigerator freezers, they have a wide variety of products available to suit a wide variety of tastes and capacity needs. We've reviewed some of their top models below.

One area that Subzero seems to be leading the pack is in the area of wine storage and refrigeration. Their wine storage units are some of the best we've seen available on the market. If you're looking to store a $14.00 bottle of Chardonnay, then these units are a bit over the top. But, you have a few cases of the 1964 Chateau Lafite Rothschild, well, you'll want to protect them as best you can. The Subzero line of Wine Refrigerators is perfect for your needs. Many of their larger units have two individually controlled wine storage zones which allows you to keep your whites and reds in two completely different temperatures in a single unit!

Say goodbye to the old dusty basement wine rack. Subzero also applies their integration technology to their line of wine refrigerators allowing you to add custom panels to the face of your wine refrigerator so you can easily blend it in to whatever decor you might have.

Now here's the amazing part. Subzero has always led the way in innovative refrigeration products, but would you believe their top of line Pro 48 (pictured below) consumes less energy than a 100 Watt light bulb? Well, according to the Subzero Corporation's literature, it's true! (That same literature calls this unit "a masterpiece of preservation.") This particular unit has incredible sealing and insulation and if you get it with the optional glass door, you can choose what you want well before opening the fridge (which wastes energy). 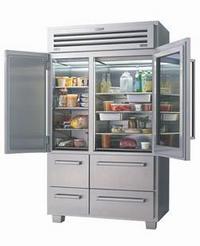 We also praise Subzero as a company because they are doing a number of planet friendly initiatives to effectively give back to the environment. Efforts such as their support for locally grown food is just one of many ways the Subzero corporation acts as a model for others to follow.