From the Integra and Evolution Series and More

A Bosch Refrigerator is often considered a true luxury item. Bosch is seen as one of the leaders in creating innovation with a dedication to quality. These are genuinely high end appliances that will give you decades of uninterrupted service.

The Bosch Company was started in 1886 by Robert Bosch when he started a workshop based on the principle of precision engineering and mechanics. Since then they have added many product lines so that they now make automotive equipment, power tools, thermo-technology, communication, and appliances. They are one of only a very few companies with the largest number of worldwide patent applications.

They are known for making some of the highest quality refrigerator models on the market. They tend to be a bit more on the higher end of the price range, but as the old saying goes, sometimes you get what you pay for -- in a good way.

Which Bosch Refrigerator is Right For You

The beauty of the Bosch refrigerator line is partially in its simplicity. First and foremost they wanted to create a product that took care of the varying needs of families. While some families tend to entertain quite often or just feed many people every day, others use their refrigerators for simpler means.

Knowing this they chose to create two different types of cooling systems:

Some of the technology Bosch installed in this line is called the MarketFresh ™ system. This helps to keep your food stay perfectly fresh for as long as possible. Also in this generation of refrigerators energy conservation is quite important so these refrigerators were designed to use the least amount of energy possible, making them Energy Star compliant.

The different styles of Integra include:

:
These are strictly column refrigerators without freezers and come in a 24” and 30” models.

:
As the name states, these are strictly freezers without refrigerators. Finally you don’t have to have your freezer right next to your refrigerator if you don’t want to. You can also add more space with the 18”, 24” or 30” versions (the 18” and 24” versions can come with or without an in-door ice dispenser).

:
While the two styles they make are both 30” wide with freezers on the bottom, one is a French door version and the other has only the large single door.

:
These are the perfect addition to a wine connoisseurs’ collection as they can come in either stainless or have an added custom panel and have dual temperature zones for white and red.

This portion of the Bosch refrigerator line allows the owner to have an upscale fridge without it being built in. Both are Energy Star qualified so as to not have to worry about the amount of energy that is being consumed.

Both of these refrigerators are 24” counter depth side by side refrigerators that contains both of their Supercool ™ and Superfreeze ™ technologies, an external ice and water dispenser, and is Energy Star qualified. 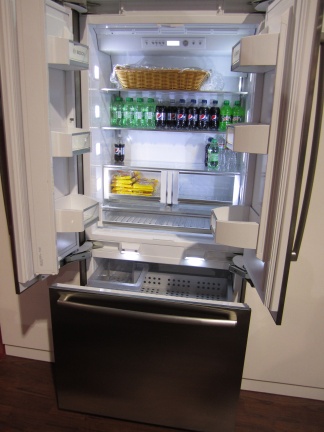 The only real difference we were able to find between the two was the fact that the 500 series not only comes in stainless but it also comes in black or white as well. While the 800 series also has a wine shelf and a temperature controlled drawer where the 500 does not. Otherwise the two seem to be very much interchangeable.

Take Me to RP Home Page

See More Bosch Side by Side Refrigerators

Take me to the Bosch Evolution 800 refrigerator review

Take me to Built In Refrigerators