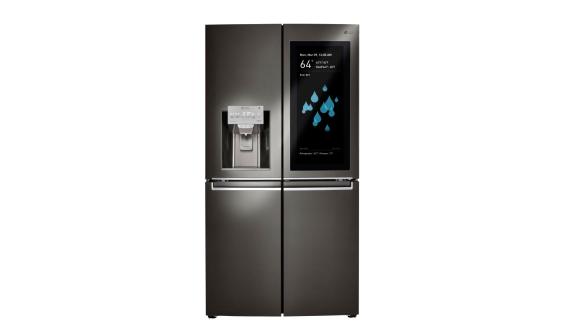 Overall: The LG ThinQ Smart Refrigerator is one of the top selling models from LG.

It has a number of very cool features such as their InstaView Door in Door tech which allows you to simply knock twice and see inside the fridge before having to open it.

The Door-in-Door feature allows you easy access to some of your more commonly used items.

But all in all, the tech of the LG ThinQ Smart Refrigerator is off the charts.

It uses the existing Alexa platform which allows you to tie in your Amazon Alexa features with the high end features of this truly 'Smart' refrigerator.

MSRP: The last price that the stainless steel refrigerator sold for was $6599 but since it has been discontinued we've found it for much less.

Seeing as how this model is no longer being made we have a few other current options listed below of LG French door refrigerators that are worth taking a look at: