Overall: The LG French door refrigerator LFC25776 is a great choice in both the fact that it has a tremendous amount of storage (it’s one of LG’s larger models) and a very highly rated energy usage. Best of all it comes with just about every bell and whistle you could want except for an external ice and water dispenser.

MSRP: $1999 is what LG recommends it is sold for but quite often it is sold for a great deal less. We’ve seen it anywhere from 20-35% off of this price. Take a look at some of the deals we’ve found on it right now: 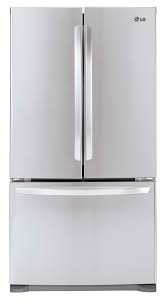 While this model really has a great deal to offer it’s always important to compare on things like this to be sure you are getting the perfect refrigerator for your needs. In that light we’ve included three other French door refrigerators below that are worth taking a look at: