Although you sacrifice some internal space when you get a counter depth refrigerator, this also helps to give your kitchen more of a professionally designed look.

The LG LFX25991ST also has an external water and ice dispenser which makes this a perfect family fridge for those who want a bit more style than a typical French Door Refrigerator.

Capacity: 24.6 cu. ft. is quite large for a counter depth refrigerator. To give you a better idea of size, most standard (non counter depth) sized French door refrigerators range anywhere from 28 to 31 cubic feet of interior storage space.

Colors: We've only been able to find this unit in Stainless Steel. 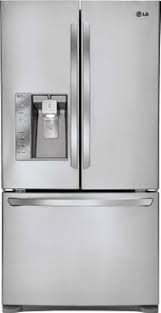 Most refrigerator brands only manufacture one counter depth model per style at a time which makes looking for another model by LG difficult. While they do exist, they have already been discontinued (or soon will be) which can definitely decrease the cost, but in the end it can also shorten the lifespan of your fridge as well. (Most companies only make the parts for their fridges for 5-7 years.)

Knowing this we thought we should show you a handful of other counter depth refrigerators to compare against the LFX25991ST: