OVERALL: The LG LFX25960ST French Door Refrigerator hasn't received the greatest of refrigerator reviews over the past year or so. The icemaker has some serious issues and there are major design flaws inside the fridge that you should be wary of.


PROS: There were a few things that really stood out for us on this unit...

CONS: Unfortunately, there were many cons with this particular model though three stood out in particular...

For the price, you can definitely find a better alternative.

MSRP: The price was $2,599.99 but this model has been discontinued and is no longer being sold. It has been replaced with a new model LFX25961 which comes in stainless, aluminum, black and white. 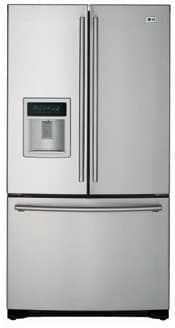